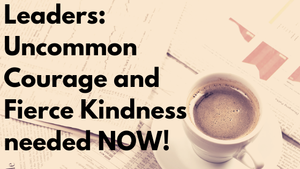 Yup, it's a VUCA world. We're all running around chasing our tails, rolling out new initiatives at break-neck speed, learning to work with new systems, in new ways every day...and somehow, we are coping. Business is mostly, good. We are optimistic and our organisations look good on the surface - things are humming along. But we are also mostly, quietly EXHAUSTED doing it all. And we have forgotten how to Lead.

Leadership itself has become volatile, uncertain, complex and ambiguous - and it doesn't work.

In my head, "Leadership" comes with a capital L, because I think it deserves it. Leadership is not just another rung on the ladder, another path to a slightly upgraded life. It's not just a bumped-up salary and a nicer car; it is a calling. A blood, sweat and tears, keep-me-up-at-night, heavenly and hellish calling.

If it doesn't feel like this to you in your Leadership role, then you are playing it too safe. You are whitewashing the realities and painting over the cracks of working with dynamic, incredible, temperamental, inspiring, grumpy, beautiful human beings. You're being a safe, vanilla-flavoured Leader. But there's no time for vanilla - we need triple-choc-chip espresso-flavoured Leadership now. In this moment, where the world of work is accelerating faster than ANY of us can possibly keep up with, Leaders must show uncommon courage and fierce kindness if their people are to thrive.

Leaders - your job is your PEOPLE!

​I'm sorry if that makes you uncomfortable, but it's the bare honest truth. I know you have KPI's, and areas of responsibility that might be fiscal, operational, strategic, or any other number of functions. I get it - you're under pressure, and sometimes looking for the easy way. Congratulations, you're still human!

It's definitely easier to focus on the "business stuff" sometimes than on the messy, unpredictable business of working with people. But unless you are doing ALL that work yourself, and producing all those results on your own, YOU NEED YOUR PEOPLE. You need them to know the work, know the desired results, know the boundaries, know how things should be. You need them to help you execute your vision. And you need to know how to lead them with the best of your human qualities in these tough, confusing, jarring, uncertain times.

If you're not Uncommonly Courageous early on, and Fiercely Kind when times are tough, your people will not trust you. They will find it hard to keep putting in additional discretionary effort or pull together as a team. They will not attain the results you are striving so hard to achieve. I have seen that Leaders who lack courage early in the game end up being unnecessarily cruel later on, when they are not getting the results they want and stress and frustration rear up their heads. This is neither helpful, effective, or healthy for anyone. And it's not even close to true Leadership.

It takes courage to call someone out for doing a poor job. It takes courage to pull someone up on the small ways they are letting the team down, or causing irritation, upset or lack of performance. Anything that's in the "grey area" of human behaviour makes most people in Leadership positions cringe. It's scary because we are all SO well-trained on all the things we're NOT allowed to say to our people - so we often opt for saying nothing at all. We think we're being kind: "Oh, he's just having a bad day", or, "Oh, I'll let her get away with it this time" have become the norm. But make no mistake. If permissiveness is your default position, you are not Leading. You're not doing much of anything - except letting a situation build up until you are forced to deal with it later (which is usually much harder).

Courage is needed in the small, uncomfortable spaces

Uncommon Courage is found in having small, respectful, honest conversations early on, when something is just an irritation, or a slight concern - and supporting your people to get back on track and stay there. It's not kind to let someone keep on missing the mark with their work, only to rain fire and brimstone down on them in the future. It's not kind to let someone get away with behaviour that's not acceptable in the modern workplace - because you're setting them up to fail in the future.

Have the courage to speak honestly, respectfully and often with your team - about what's working, what's not, how things could be better, how they are coping, what extra support they need. Set them up to do things right, right from the start. Have the courage to specify what you want, when you want it, and how you would like it to be achieved. Sure - invite discussion and individual input - but have the courage to make your needs and expectations clear. That's step one.

Every human being on this planet has their own unique quirks and frustrations. Everyone will reach boiling point under pressure; some will handle it better than others (that's a whole other article!). Every person in your team will also have outside "life" stuff adding to their individual stress levels in general. If an individual in your team drops the ball, has a bad hair day, forgets something important or just generally f*cks up, you need to call on Kindness. Not watered-down, "Is everything OK? (gosh I hope you don't actually open up and tell me because I just want you to get on with your work)", empty-gesture-kindness.

We already know about the power of compassion to heal hurts and connect with others. But Real Leadership also requires Fierce Kindness. Because it's the best way to deal with whatever is going on. It is respectful, raw, honest and real. And it is the right thing to do.

If you do care about your people, you will want them to do well, and you will care when they're not. You will fight for them - for their mental, physical and emotional health in the workplace - and you will be Fiercely Kind when things are not going their way.

If you do not care about your people, you're in the wrong job.

You don't need to become their best friend, confidante, surrogate Mother-or-Father figure, or counsellor. You don't need to cross boundaries, give unwanted hugs, or probe into their private life. But you DO need to recognise that the wonderful, unpredictable, wild and sometimes difficult human beings in your team are just that - HUMAN - and in these high-pressure times, EVERYONE could do with a little more proper, hearty kindness in their lives.

If you have been Uncommonly Courageous early on, and had the difficult discussions you needed to, then nearly the ONLY reason someone in your team should go off-track, is if they are struggling with a life-changing event - a bereavement, an illness, a family emergency. And during those times, they need Fierce Kindness, sometimes just to take even one more damn step. You can be that for them. Cruelty in these difficult times - asking them to "push through", or "leave your home life at home", or asking them to give more than they can - is the opposite of Leadership. Fierce Kindness is the only answer.

Responding in a VUCA world

Leaders, let's respond to these volatile, uncertain, complex and ambiguous times by providing something extraordinary. Let's be stable, certain, clear and confident in our Leadership. And let's start with the basics - Courage and Kindness of the highest order.

Want to stay in the loop with new articles, courses and events?

Catherine is a true believer in the power of people to transform organisations - and the world. An inspiring Speaker, Facilitator and Coach, Catherine has spent more than 18 years of her career leading teams and individuals to extraordinary performance. She has worked as a Consultant, Trainer and Human Resources Manager with some of the largest service organisations in the world, both in Australia and internationally.